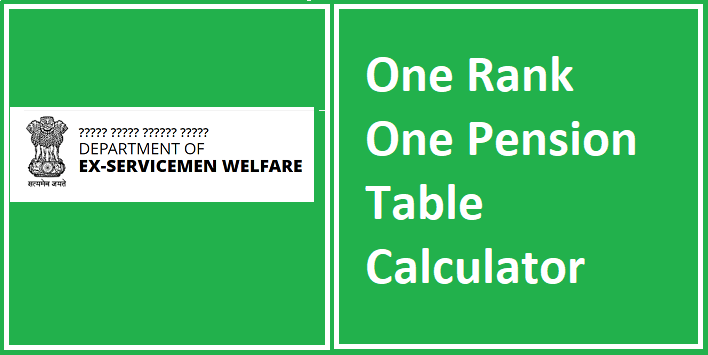 OROP Pension Table 2023 pdf. DSEW One Rank One Pension 2 Revision Table Calculator Latest News and Arrears to be paid from July 19 to July 22. One rank one pension, is a decision which is finally being brought into action by the union cabinet of the central government of India. The OROP implies that all the ex-servicemen shall be granted same amount of pension considering their time of service in the defence department and their rank. DESW – To cover this gap between the early retired servicemen and presently retired servicemen the authorities will revise the pay scale for all the ranks this year to ensure uniformity amongst all.

The concerned beneficiaries can refer to this article to know more about the revised OROP pension. The proposal to amend the provisions of ‘One Rank, One Pension’ for defence forces personnel and family pensioners was brought into action by the approval of Modi government on 30th December 2022. A number of Ex-servicemen had been demanding this to happen for a long time even though their requests were recorded by the Supreme court of India which are now finally being answered.

According to the OROP Scheme, the future pension of the Ex-servicemen pensioners would be based on the minimum and maximum averages of their pensions among retired officers in the Defence Forces in 2019 who had the same rank and length of service.

One Rank One Pension Table 2023

Arrears will be paid to the pensioners in quarterly instalments. However, all the family pensioners, including those already receiving Special or Liberalised Family Pension and Gallantry Award Winners, shall be paid arrears in one instalment. Arrears with effect from July 1, 2019, to June 30, 2022, have been calculated at Rs 23,638 crore as per the applicable dearness relief. From the source we also inform that around 25 lakh pensioners will be benefited with the OROP decision of the government.

One Rank One Pension Calculator

Some highlights for the One rank one pension are stated below:

Based on the calculation of average minimum and maximum pension of those servicemen who retired from the defence forces in the year 2018, the pension of the Ex-servicemen pensioners will be re-fixed and reconsidered that served under the same ranks. The scheme will also be applicable to army personnel who have retired till June 30, 2019. Based on the year 2015, the Government of India introduced the One Rank One Pension Scheme. as per the OROP scheme the decision will be reviewed every 5 years.in order to benefit the Ex-servicemen the government has spent around more than crores in the past years to bring the OROP in action.

The authorities have provided the revised rank wise list of pensions for the ex-servicemen. The list is stated below:

One Rank One Pension Portal

Bringing the OROP into action for the retired servicemen did not happen without controversies. numerous disputes were seen in the way to bring the OROP scheme into action and over the details of the policy, including the definition of same rank and the methods used to calculate pensions. Some veterans also argued that the amount of pension being provided under OROP was still insufficient. Keeping all these controversies and disputes at bay the OROP policy has been a largely successful step in providing a more equitable system of pension payments to military personnel and their widows. It has also helped to improve the morale and well-being of retired military personnel by solving the financial difficulties they had to face in the past years.

A tweet uploaded as a proof after the final decision by the respected prime minister of India, sh. Narendra Modi which stated that: “Our military, engaged in the service of the nation, is a symbol of people’s pride. Our government committed to their welfare. Keeping this in mind, the Union Cabinet has approved pension revision under OROP for ex-servicemen and their families.” This tweet not only served its purpose regarding the work of Modi Government but also brought relief to the pensioners.

Overall, the One Rank One Pension policy has resulted in becoming a significant achievement for the Indian government as well as for the military department by being able to address a longstanding issue that became a cause of massive frustration and resentment for many retired servicemen. The government of India has taken a welcoming and appreciable step to resolve the most controversial issue implementing the One Rank One Pension OROP Scheme 2023. It a massive relief for pensioners, especially those who felt that their needs neglected.